It had actually been published in February this year 🙂

Ok, I was just looking for a word that rhymes and makes a good title with ‘Skittles’.

Few weeks ago when I dropped by the bookshop, I decided to buy a pack of Skittles. There was an array of flavors like original, sour, riddles (flavors not matching with the colors), and wild berries. So I picked wild berries simply because I like strawberry and the like. So there are 5 flavors in the bag: wild cherry (red) – I like this very much, raspberry (blue), strawberry (magenta), berry punch (purple), melon berry (green).

I ate the Skittles at a table and there was a bowl containing water (it was to put the Skittle bag in because there were just too many ants on the table. If you are confused, this is how it works: there was a jar put upside down in the middle of the bowl that serves as a platform on top of which the Skittle bag rests. The ants have to be daring enough to swim across the water in order to reach the Skittles).

Sadly a few pink Skittles inevitably dropped into the water… 😦 but because of that I got to observe something interesting. The color dissolved in the water quickly as if I just dropped a blob of pink ink into the water. I quickly grabbed my phone to capture the moment. 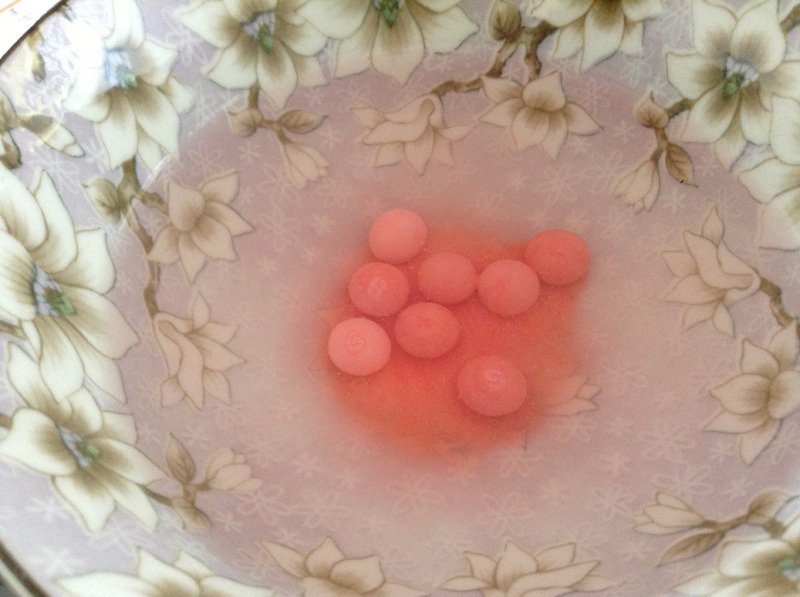 (yah, quite a few dropped. In fact I added some more on purpose to observe this phenomenon more clearly:P) But more interesting was what I observed after a few seconds later when the water had been clouded entirely. 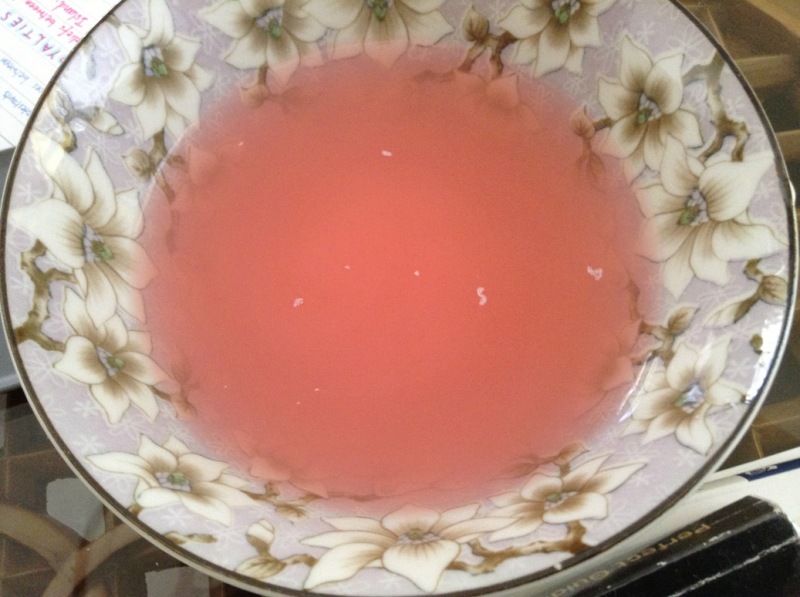 See what is floating there on top? The ‘S’s were detached but still intact, and floating in the pink solution! Apparently the sugar that made up the letter ‘S’ is not as readily dissolving as the pink coloring. A fascinating fact to learn that day.

How to cook an egg in the microwave?

This post is going to be less boring because I’m gonna include some photos.

So the answer to the above question is use a microwave egg cooker. Yesterday when I ended up in a supermarket nearby (this is one of the places I like to hang out),  thinking to buy stuff to eat for breakfast, I came across this egg-shaped gadget in one of the hanging racks. And upon realizing it was only pegged at 1.95 dollars (0.05 dollar cheaper than 2 dollars!), I immediately put it in my shopping cart and went to the egg aisle to grab some eggs to cook with it. Part of the reason I bought this is I miss that boiled eggs that are always available at breakfast back home, and the pantry only has a microwave to cook things (which I’m kinda glad for, because imagine the massacre scene that will happen in the pantry after a group of irresponsibles cook high level dishes with a stove). I also noticed the stall at school which I always buy breakfast from use a kind of egg cooker to churn the boiled eggs they sell. So it is interesting to try.

I was wondering why we could not just put an egg in a container filled with water and heat it in the microwave like that. But the existence of this gadget proves that cooking an egg has been a tricky business that this gadget has successfully solved. So this beautiful Saturday morning I woke up with a boiled egg in my mind (food is really  a powerful allure that can get you out of the bed quickly). I opened the plastic bag and read the instruction carefully. 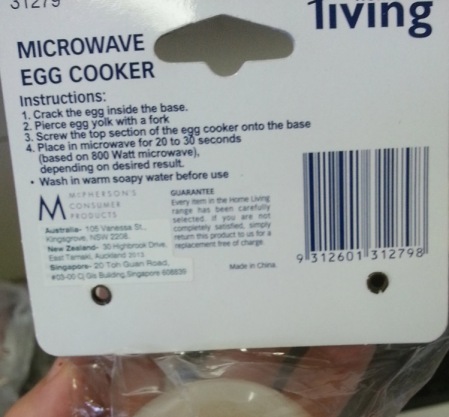 Instructions: 1. Crack the egg inside the base. The base means the bottom part of the whole  thing (the yellow part). Oh, I even washed it in warm soapy water before use:)

2. Pierce egg yolk with a fork. I don’t know for sure the reason behind this but I guess this is to prevent the heat from accumulating inside the yolk or to get a well-cooked yolk. So being an obedient user, I did. 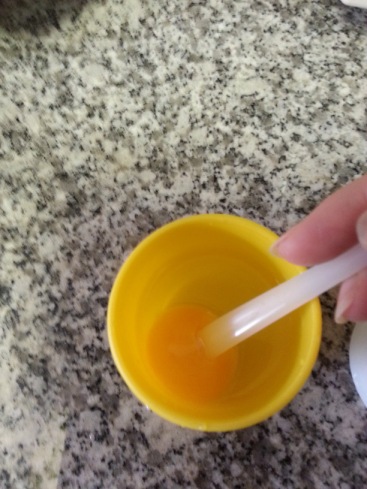 3. Screw the top section of the egg cooker onto the base. I don’t  really know the purpose of closing this and whether it will be ok to just leave it open. The top section has holes to let the gas that is built up to escape.

4. Place in microwave for 20 to 30 seconds (based on 800 Watt microwave) depending on desired results. Ok, for this part I am not sure how many Watts my microwave is, but 800 sounds a lot so I just set it to the highest heat. And I thought 30 seconds was not enough to cook an egg (you need a few minutes when you boil an egg conventionally on a stove!), so I thought I just let the microwave run for  a little bit longer… before… POP!!!

The top section had just popped out! I imagined the interior of the microwave, splattered with egg gooey, and I braced myself to open the microwave door…

A nice smell rushed out. Everything was still dry and ok. Phew. It turned out that the egg had been cooked (a little bit too hard rather).

And yeah, here is the photo of me proudly lifting  chunk of well-cooked egg up. You can almost see a mist of smoke wafting up.

I gulped the first spoon of the egg with a sense of satisfaction. The taste is good but it can be better with salt and pepper that I’m gonna bring home from McDonald’s next time. And the texture is a bit too hard and dry. I will make sure I stick to 30 seconds next time.

So that’s it. How to cook an egg in the microwave. My sister is a little bit concerned about the chemical substance from the container that will be absorbed into the egg during the process. May be I just refrain from using this too much. Anyway this thing should be microwave-safe in the first place, we just have to take an extra precaution:(

Operaaaaa (read it with a vibrato)

A few weeks ago I had the opportunity to watch The Phantom of The Opera. Knew about it, heard some songs. But I had never really watched it before, and this would be the first time I would be watching an opera (or drama or musical?) in a theater.

So we went down (three of us) hurriedly on a Sunday afternoon to the Marina Bay Sands Shoppes (because that is where the theater is). The performance started exactly five minutes after the stipulated time. We were relieved that we could make it on time as we did not have to invite disapproving gushes from the audience whose sight we blocked as we made our way to the preassigned seats. As any other formal performances, photography and video taking were not allowed (so there won’t be any photos posted here:)). Outside food and drinks too. Well, I thought to myself, understood, since we do not want to disturb the other patrons  by the sound of munching crispy stuff or dirty the premises. However I  knew I was wrong when I saw some people bring in crisps (or popcorn? I can vaguely recall) after the intermission, courtesy of the theater snack stall outside. So, I conclude, the theater is more like a stricter kind of cinema. Nothing bothering me, just an interesting observation.

So the thing that impressed me the most as a newbie in watching this kind of performance is the stage effects, how such bulky items can move, all the mechanisms, something the movie people can do, but the audience was kind of captivated since we were watching all the tricks live. This thing – together with the singing, acting and extravagant costume – makes up a big part of the enjoyment, so I should not describe it any more.

The singing too is unbelievably good. I don’t personally have patience in listening to a dialogue that is sung instead of spoken like normal conversation, but I appreciate it in terms of the melody, the technique, the sweetness of the voice… I heard that this was not the best version of the performance, but wow… listen to that voice, that pitch, that strength that fills up the whole room. It brought  me to a new level of meaning of singing.

As a non-native English speaker I had a hard time trying to figure out what the actors said. I could not  hear the dialogue properly and as a result the story came across as sketchy. I resorted to Google during the intermission to get a better picture. I looked around the room and saw a bunch of little kids sitting down, and I wondered, what the parents were thinking bringing the kids here. Sometimes during the performance the parents would whisper something to the kids to explain things that were going on on stage. I guess more and more parents see the merit of exposing kids early to forms of arts, or even they have not seen the merit, they believe that this practice will pay off somehow in the future.

Last week, I learned an interesting concept in one of the English lectures that I attended. It is called ‘suspension of disbelief’. It is like when watching a performance, we know the actors are just acting, but we let them take the rein of the situation. We, as the audience, just sit there and follow whatever is being presented to us in order to enjoy the story. If we keep thinking that they are just actors doing their work and pretending, much of the enjoyment is gone, and even sitting in a big room with hundred of other people for two and a half hour seems to be a stupid thing to do. Suspending our disbelief is something that we frequently do without realizing it because it comes so intuitively, even kids understand how to view a performance without being taught.

So this is the end of this post. This is Friday and I have to finish up some assignments.

christy kabul
Create a free website or blog at WordPress.com.