So I had already wanted to write this blog before this interesting news about Miley Cyrus singing with a giant cat as a backdrop came up recently. How apt. Never in my life I had ever thought that I could draw a similarity between her and me.

This is a more censored version of the picture hehe:)

OK, this is what I want to write about. Recently I made a giant cat. And its name is Chill Cat. And this blog will chronicle the making of this cat.

In one of the classes that I attended, each student was supposed to come up with an artwork to be exhibited. This was rather stressing since the last time I exhibited (my final year project in uni), I had a few months or so to prepare. And now we only had one month or so, not mentioning that the first few weeks could not be used to start making the artwork due to the piles and piles of other assignments to do. Nevertheless, I could still start planning early, and was thinking along the line of what I always liked to do so far… things like comics, cartoons and what-nots. I had a little chat with my teacher, the famous sculpture artist Tang Da Wu… He didn’t object my initial intention of having a 2D work (he is so awesome, he respects the thoughts that you put into your artwork), but he said it would be good if I used this chance to explore the area of 3D sculpting and stuff (which I thought, was an awesome thing as I could get to learn from the master himself).

So in a fine afternoon a few days later I was struck with an  idea of having a garden with an animal sculpture lazing around the compound in my school. The premise was simple: that will serve as a reminder of how people need to chill and stuff in a place where students feel so stressed with examinations. And I proposed to him and he agreed. So that’s how it got started. And I naturally gravitated to choosing a cat as the character perhaps because I did something like this before:

This is Chill Cat’s predecessor in 2D moving form.

So I felt so satisfied about the fact that I cleared the first stage which was thinking about what to make. The questions remained like how on earth am I going to make it? I knew zero about this thing?! But since Da Wu was so confident about me – the absolute newbie – making this thing, I felt very secured too. I made a miniature wire frame of a cat for a start.

Then time flew by and came the week before the exhibition. The crazy thing was I even had a notion to go back home during this weekend. Looking back, if I had ever gone back home, Chill Cat would not have been around… it would have just stayed a notion, an idea, disappearing quickly as the wind blows… ok.

First thing, I made the structure using wire, a very thick one. I combined some not so thick one because the thick one needed more strength to bend. But using a thinner wire was wrong (read it carefully: THIS WAS WRONG!), because later on I learned the importance of having a robust wire frame so as to make the structure not sink in when we apply the plaster. I ended up having to make more reinforcement from bamboo sticks to get the structure holding up.

The head in progress

The whole thing in progress and my yellow bag making a cameo. Look at how big the pliers are!

After the frame was somewhat there, I covered it with wire mesh. This was a painful process (literally!), because there were billions (ok, this is too many) of the wire ends which poked and poked.

Before long, I have already gotten a lot of scratches from making this cat.

Pampering a sore throat with sashimi really helped a lot.

I learned how to make a mix of plaster. I did not count how many basket of plaster I made for the whole process but I think the number could easily fetch to 50 baskets (yet I am still far from pro). Working with plaster, especially for a newbie, like me was very tricky. One thing about the mixture of plaster and water is… you can’t stir it because you will spoil the structure formed in the mixture. So to get rid of the existing lumps, you have to gently push them down and crush them against the base of the container.

And then not mentioning the ideal thickness when you start dipping the cloth into the plaster mixture to be applied onto the wire frame. Too thin a mixture will make it splashing everywhere (poor shoes). The best will be when it is like a dough. But at this point of time we have to work fast because it will harden very fast from that point onwards. I should admit I wasted a lot of plaster for not working fast enough or not having the right approximation of the amount that I needed at one point of time. This photo below was the initial stage of putting the plaster cloth. Look at the amount of bamboo reinforcements and the strings of rope that were tied around to keep the shape as much as possible. 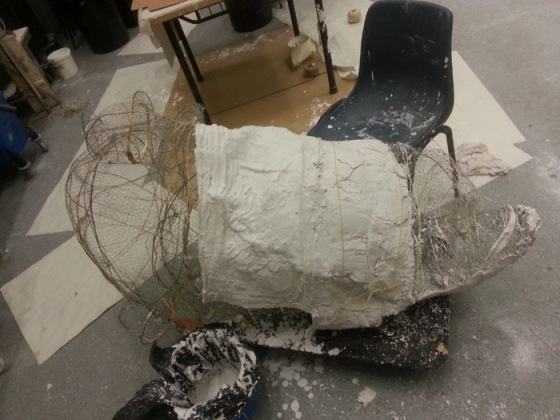 Getting covered… At this point of time I could already breathe much easier. Seeing Chill Cat gaining its flesh and skin was very relieving. Look at the mess I made in the studio. Much thanks for the understanding of the lab technician.

Really I learned a lot from this process. The good thing about this was that… I did not feel scared after all… The security that I got from the fact that I was just a beginner trying out, having a few friends working around me and the assurance of having an experienced person who would always be there to help really made me chill. As chill as the chill cat. This is not like me. I used to be so stressed and so depressed. I guess this was one of the most important takeaways from this process.

Me working with the master

Even though the whole structure was covered, this was still long from completion. Since the shape was rather distorted (due to the problem with the wire frame as explained earlier) and the surface was not so smooth, some patching had to be done. We also moved the cat to the site to see if it blended with the  surrounding (that was a really heavy thing to do. I got a backache from that). 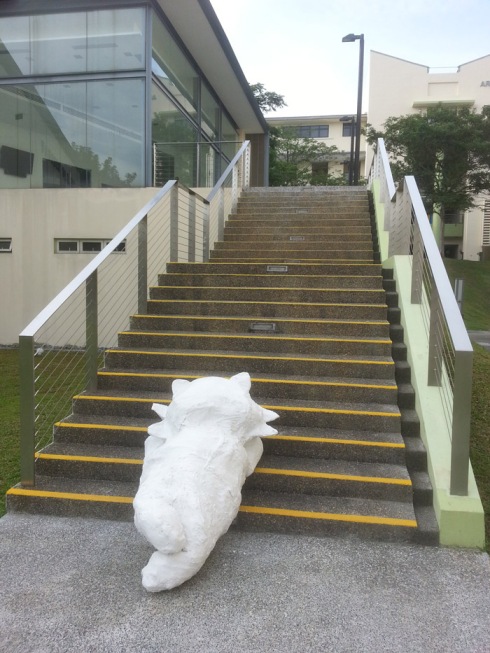 Chill Cat in the environment

At the end my teacher suggested having the sculpture at the end of the staircase as to make that more obvious to anyone, as opposed to having it laying around at the side. This was a diversion from the initial idea as I was thinking of having it chilling on a green patch of grass at first. During the crit session someone commented that putting it there was very apt because a cat would just be lying in the middle of your way without caring of anyone around it.

Afterwards we brought Chill Cat back to the studio to add the necessary details on its face. The shades, the nose, the bumps on its face. I should admit I did not do much here. I was too scared that I would ruin the finished smooth surface that my teacher could achieve.

Stopping for a picture. In the middle of shaping the shades for Chill Cat.

Smiling in its sleep

So we did the remaining work to smoothen the surface out. And I thought the journey was still long because I still needed to colour it. But at the end I decided not to. This was based on a more practical reason, but during the crit session, somebody said that it was more apt to leave it white as the environment already had a lot of colors and giving it colors would make it distracting (or something of that sort). I also felt that leaving it white made it less gimmicky and mascoty.

Monday came (the exhibition opened on the next day), and I was still doing the surface smoothing as it took me longer than expected. People had moved their works to the gallery and I was left behind in the studio. I had no idea when I would be able to end. There was still much rough surface I needed to cover. So my teacher came and told me, “let’s move it to the site at 8 pm.” (It was 7pm). So I worked for another hour and when the clock struck 8, I stopped, looked at it and felt satisfied that my work was done (despite the fact that there was so much more that could be done). So here is an interesting concept: there is no finish line in making a work. One has to take the liberty to put a limit to what is considered as done.

So the exhibition opened. I heard a few remarks that that cat looked like Garfield (which I just realized. Lucky I did not paint it, because I was thinking to paint it orange)

Looking back to the time I was not even sure how to make a sculpture and looking at the big white monument in front of me  was like a dream come true… And seeing how people and my classmates took picture along side Chill Cat with the same pose was also like a dream come true, because that was how I imagined people would interact with it (although they had to be instructed to do so haha).

So (referring to the start of the blog), do you see the similarity?

That’s all! Oh, and as to its whereabouts, Chill Cat is resting at one of  the sculpture garden at Goodman Arts Centre, courtesy of Tang Da Wu.